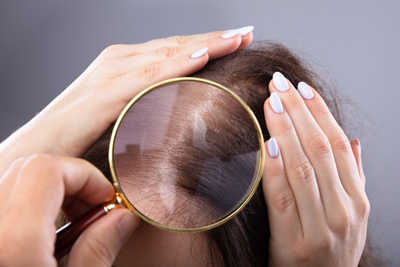 Frontal fibrosing alopecia (FFA) describes a type of hair loss typically seen on the front of the scalp in women. This condition is on the rise and has become one of the more frequently seen causes of hair loss in women. FFA is a type of scarring alopecia, which was described first in 1994. Increased incidences have been reported worldwide, especially in the US, Europe and Japan. Frontal fibrosing alopecia largely affects post-menopausal women, and women of all ages and men can also present this condition. This is a progressive hair loss which is usually irreversible, making early treatment essential.

WHAT ARE THE SYMPTOMS AND SIGNS OF FFA?

Frontal fibrosing alopecia presents as a spectrum, the lightest cases involving only the frontal hairline and eyebrows, while the more severe cases potentially affect the entire hairline, plus facial and body hair. The condition is characterized by a band-like cicatricial alopecia of the frontal region of the scalp. Cicatricial indicates a scar left by formation of new connective tissue. If we observe the hair follicles from a microscope, we see lymphocytes (a type of white blood cells) infiltration and a reduced number of hair follicles along with fibrosis (the healing process with scarring). While FFA may be mostly asymptomatic, some may feel burning sensation, pain or itching in the scalp.

WHAT ARE THE CAUSES OF FFA?

Specific causes still remain uncertain, but a combination of genes and environmental factors have been implicated to cause frontal fibrosing alopecia. Environmental factors are suspected to play a role in FFA, including “dioxin-like” substances found in foods of animal origin, certain drugs, sun exposure and sunscreens. Viral infections are also found to trigger this condition in patients who are already genetically predispositioned to suffer from frontal fibrosing alopecia. We believe there are also hormonal factors that play a role in the cause of FFA, since there is an increased risk for women post-menopause. However, hormone replacement therapy is not found to be effective in treatment.

WHEN SHOULD YOU SEEK HELP FOR FFA?

If you are experiencing any sort of hair loss, it is important to make an appointment with a dermatologist. Dermatologists can evaluate the scalp with a dermatoscope, which will reveal inflammation and/or follicular reduction where you are experiencing hair loss. Since FFA is irreversible, it is important to catch this condition early so that treatment can be started.

HOW IS FFA TREATED?

Unfortunately, a completed effective treatment has still not been found for frontal fibrosing alopecia. Treatments aim to reduce inflammation of the scalp, slow progression and reduce the sequelae of FFA. More studies and clinical trials are necessary to approve future treatments. Combination therapy is often helpful, though recurrence is common. Sometimes spontaneous, unexplainable stabilization of the disease does occur.

At APDKC, Dr. Kaplan and his team are trained to evaluate and diagnose hair loss. Dermatoscopy will be utilized to evaluate severity and occasionally a biopsy will be performed for confirmation. Treatment options for frontal fibrosing alopecia are based on where on the spectrum the diagnosis falls. For mild FFA, localized application of steroids may be enough of a treatment plan. For more severe FFA, steroid injections and/or oral medication may be more effective treatments. Hair grafts and transplants are also an option, but only in patients with a stabilized condition. If the FFA is not stabilized, the majority of the grafted hair is expected to be lost within 2-3 years.

WHAT IS THE PROGNOSIS OF FFA?

Progression of frontal fibrosing alopecia varies greatly among patients. Sometimes it may spontaneously stabilize. However unfortunately, some may have a poor outcome where there is a marked degree of hair loss. Again, early diagnosis and treatment are imperative.

If you are concerned that you are suffering from frontal fibrosing alopecia, Dr. Kaplan and his team are here for you. Contact our office today at 913-469-1115 to schedule an appointment.